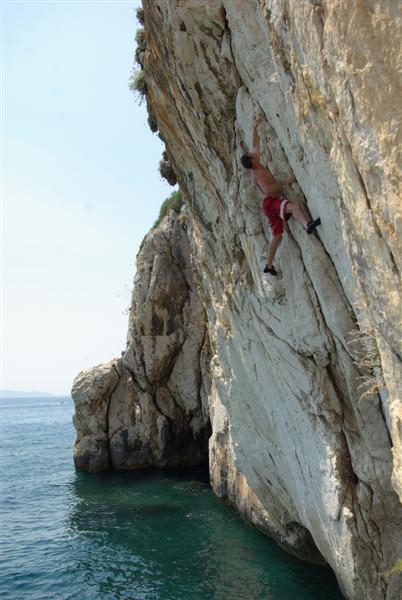 Deep water soloing over the years has become one very popular way for Dalmatian climbers to do a good training without sweating due to high temperatures in the summer time. Here in Dalmatia we are blessed to have who-knows-how-many locations for practicing this way of climbing since this is a country “with 1200 islands” and interesting thing is that almost every island has vertical or overhanging cliffs on its south side.

Very important thing to say about Dalmatian deep water soloing is that we have very friendly sea with practically no danger from it. We have red so many articles from all over the world, especially Mallorca and Dorset, and main problem for people over there are jellyfish which may become very dangerous for climbers or humans in general. Adriatic sea doesn’t have so many jellyfish, and the one we do have are so rear and not so dangerous. We do not have dangerous sharks or any other life threatening danger living in the Adriatic.

Short history of Deep Water Solo in Croatia
Main reason why our climbers started to climb from the sea are high temperatures during the summer in Dalmatia and for fun, off course. It becomes so hot here in the mid summer it’s almost impossible to go rock climbing hard and demanding routes, even in shade.

First tracks of deep water solo in Croatia started in mid 90’s in Split town region, local area called Sustipan, where Dalmatian climbers came and saw overhanging cliffs and immediately started to climb. Interesting thing is that traditionally we climbed barefoot, without chalk. Because of this, you needed some period of adaptation, especially for your feet that would become bloody very often. It was brutal! Only beginners were wearing climbing shoes until they adopted. It’s so funny to remember those days. After Big up production movie Psihobloc Dws started to become must-do-thing here, and it started to develop in lots of ways. First we have realized that without climbing shoes we are limited with hard routes. So we started to use them and it was a relief! The hardest routes in the region were instantly repeated (we are talking about grades up to 7b+) and we were ready for new, harder and higher places.
Today we have climbers who are practicing only deep water soloing during the summer. They are opening new routes, exploring and developing new areas, preparing topos and waiting for strong climbers to come again. Today we are climbing with chalk so we are even preparing bolts under the specific lines, just above the sea surface so climbers can swim to it, get out and dry, put some chalk and go. It is a different story and we find it much more challenging this way.

2005. Best world climbers came to Croatia and went to Kornati archipelago (the best deep water soloing area in Dalmatia). They spend couple of days climbing in National park and the managed to climb the hardest DWS route in the world until then, Ring of fire 8b+. This event has been recorded and distributed all over the world known as climbing movie DEPTHCHARGE. This was the spark that started deep water soloing revolution in Croatia.