You are reading posts from Big Wall category
Post published: 17.07.2012 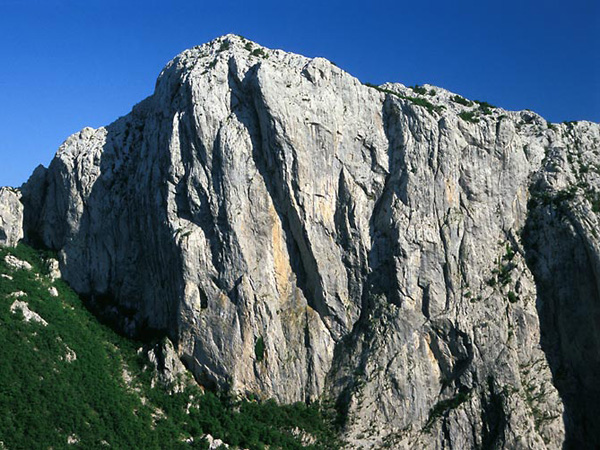 Paklenica National Park is an iconic place of climbers „big wallers“ from all over Europe, so over thirty percent of the park visitors are climbers. Anica kuk, 350 meter vertical rock, counts about 90 sport climbing routes with nests of griffon vultures and eagles, and the fabulously beautiful wild canyon make the „addiction“ of climber to Paklenica completely understandable.
Experiencing climbing Anica Kuk route is a “must be” for every climber from Balkan area!
National Park Paklenica counts about 360 routes from easiest sport routes up to 8b+ climb Il Marattoneta, the hardest sport climb in the area.

Paklenica National park is the biggest and most important Croatian climbing centre, known also outside of Croatian borders. A special charm to this climbing spot gives the vicinity of the sea shore, so the Riviera of Paklenica is an ideal location for a combination of climbing and water sports.

The history of rock climbing in Paklenica is actually the history of rock climbing in Croatia. All began way back in 1938. when Dragutin Brahm tried to climb Anica kuk. Unfortunately, he died trying. Two years later, Slavko Brezovecki and Marijan Dragman completed Brahm’s route. After that, Croatian climbers climbed all routes that are now established routes in Paklenica. There are many classic routes such as Mosoraski, Velebitaski, Klin, and Funkcija.

The main climbing season in Paklenica starts in spring and lasts until late autumn. For the holidays of the 1st of May – Labor Day, there is a traditional gathering of a large number of climbers in Paklenica. Since 2000, a competition Big Wall Speed Climbing is held here, the first competition of such type in the world. It is a connection of two climbing disciplines: speed climbing, which is usually done in short indoor directions on an artificial rock with climbing big wall cliffs which imply climbing in pairs which takes several hours, and sometimes even days.

Beside the competition part, the climbing gatherings in Paklenica have their accompanying program. So, there is a fair of outdoor equipment, numerous lecture, film projections of films on climbing and rock-climbing. Such event counts up to couple of thousand of climbers visiting Paklenica, making it again unique in the world.

Paklenica as a huge climbing resort has climbing guidebook covering all, sport and big wall routes. For now, we do not intend creating PDF mini guide for this area!